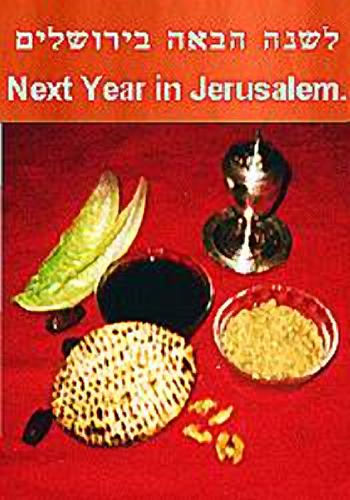 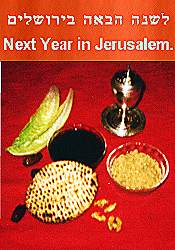 Click here for Passover Halakhoth and background from ATorahMinute.com.

Click here to send a free e-greeting card.
Click here for a CD of songs for the holidays, including Pesah.

Click here for the special Halakhoth when Pesah falls on Mosi Shabbath.

Debar Torah: Why did G-d treat the Children of Israel differently to the Egyptians? Read here.

HaHodesh Hazzeh Lakhem Rosh Hodashem – this month shall be unto you, the first of the months (Shemoth/Exodus ch.12, v.2). Hodesh HaAbib, the month of Nisan is the first month of the year in the counting of the months. No Widdui (confession) is recited during the entire month and there is no fasting. One who has an anniversary of the passing of his father or mother, R”l, should consult a Hakham as to whether the fast should be held in Nisan or not.

Birkath Ha-ilanoth, the blessing of the trees should be recited during this month. It is preferable to say it with a minyan (quorum of ten males) so that a Qaddish may be recited. In Qabbalistic terms, the souls that returned to this world in Someyah (trees and the like), have the opportunity to make the transition to Adam (humans) with the help of our prayers, without having to suffer a difficult intermediate step. From this we see that the recitation Birkath Ha-ilanoth and the Qaddish are very important indeed.

On the fifteenth day of the month of Abib (Nisan), falls the first day of the Festival of Pesah (Passover). This is the Holiday during which we remember and recount – in the Haggadah ? the wonders that the Holy One, Blessed Be He performed for us in Egypt and how He sanctified His Holy Name in the eyes of all the nations.

It is also a festival in which there are a plethora of Minhaghim (customs) and Halakhoth (laws) which add to the excitement of an already important occasion. However, the very fact that there is a multitude of customs makes it impossible to treat them here in detail. Please contact us if you require additional information.

On the eve of the fourteenth day, the head of the household makes the Bediqath Hames (Search for Leaven) by the light of a candle with only one wick. He takes with him a knife (with which he thoroughly checks all cracks and crevices where Hames may have been put) and a bowl in which a piece of bread is placed. A little salt should also be added ? one reason for this being that salt is known to be a deterrent to Satan who is jealous of this Minhagh. The Minhagh among Ashkenazim is to use a feather and a wooden spoon during the Bediqah.

It is the custom to hide ten pieces of bread (wrapped in Paper) for him to find and burn the next morning with all the remaining Hames. No more may be eaten from four hours “Zemanioth” (i.e. one third of the day) after daybreak.

No Massah (unleavened bread) may be eaten either, from the eve of the fourteenth until the Seder at night (Massah Shemura is not eaten from Rosh Hodesh). It is worth noting that most Sephardim recite the Berakha of Hammosi, on Massah which is Kasher LePesah, only on Pesah itself. The rest of the year, since this Massah is considered to be Lehem ‘Oni (Bread of Af fliction) the Berakha of Mezonoth should be recited over it. Ideally, however, when eating Kasher LePesah Massah during the rest of the year, the Berakha of Hammosi should be recited on bread and then the Massa should be eaten after it with no additional blessing. This way all opinions are satisfied. Massah which is not Kasher LePesah, however, is deemed to be Hammes and Hammosi is recited.

When Shabbath immediately follows a holiday, an ‘Erub Tabshilin must be made in order to permit us to prepare food on Friday for Shabbath. Before Minha, on ‘Ereb Pesah, 58 grams (2 oz.) of Massah must be set aside together with 29 grams (1 oz.) of a cooked food – usually a hard boiled egg. A blessing (Berakha) and a formula permitting us to cook on Friday for Shabbath, must be recited. They can be found in most Holiday Siddurim (prayer books). In the Tefillath Yesharim Shalosh Reghalim books they can be found on page 7.

In homes where the amount of candles lit by the lady of the house on the eve of Shabbath and Holidays depends on the amount of people who are called to the Torah in the morning (Qomoth), five candles are lit on Pesah. However, for Qabbalistic reasons, as explained in Ben Ish Hai, it is appropriate to light seven candles, irrespective of how many Qomoth there are in the morning. As such, the lady of the house, when lighting the lights on the eve of Pesah (both nights outside the Land of Israel) lights seven.

One should be aware that (in Qabbalistic terms) the night of the Seder gives out a light ? as strong as the sun ? in the spiritual lights above. As a result, the Yeser Hara’ (Evil Inclination) searches feverishly for an opening to enter the house and exert its disruptive influence through a member of the household. The wise one, however, who has eyes to see, should chase away argument and bring in harmony. An allusion to this is made in the term “Mosi Massah” which can be read to mean “remove argument”.

As is well known, most Sephardim eat rice on Pesah, whereas Ashkenazim do not. However, since rice is not Hammes (in accordance with the outcome of a Talmudic discussion on this matter), an Ashkenazi guest in a Sepharadi home may eat food which was prepared in the hosts utensils, even though his own Minhagh is to refrain from eating the rice itself. Those who do eat rice must be very careful to check it three times, grain by grain, for wheat or other impermissible foods.

Prior to Musaph (the additional service), on the first day of Pesah, Morid HaTal, the prayer for the dew) is re-instituted. The counting of the ‘Omer is begun (at night) at the onset of the second day of Pesah and continues up to the festival of Shabu’oth. Each one should make special signs for himself, so as not to forget even once. If one forgets at night and does not remember to count (without a Berakhah) during the day, then all the Berakhoth of the previous nights might be considered to have been in vain and moreover, he has defaulted on a Miswath ‘Aseh (positive precept).

At night, at the conclusion of Pesah, it is the custom to to hit one another with green stalks (such as celery) while wishing each other “Sentak Khadhra” which is a a blessing for a green (fruitful) year for all. And just as, in His Infinite Mercy, the Holy One Blessed Be He redeemed us from Egypt, out of the house of bondage, so too we pray that this year will bring the Final Redemption. Leshanah Habba-ah Birushalayim, Amen.