“On the eighth day you shall have an ‘Asereth (holy assembly)” (Numbers 29).Ý

On this it is written in the Holy Zohar: ” A king invites some guests. When they depart he says to his household, ‘Till now we have all been attending to the guests, now we shall rejoice together for one day”.Ý

In the Land of Israel, Shemini ‘Asereth and Simhath Torah are celebrated together on one day, but in the diaspora they are separated into two days. This is a time of great rejoicing for Israel.Ý

From a very early age, every Jewish child and person looks forward to the rejoicing and celebrations of Simhath Torah (whose name appropriately means “Rejoicing of the Law”). The Haqqafoth (circuits made with the Sifrei Torah) are one of the central points on this happy day.Ý 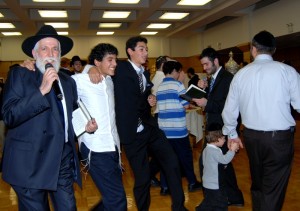 ÝTaken from the writings of the Hakham, Rabbi Ya’aqob Menashe.