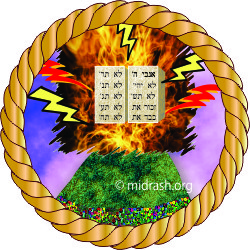 Shabu’oth falls on the 6th of Siwan (and 7th for those who live outside the Land of Israel) every year. Yet itáis the only holiday in the Torah whose date was not specifically mentioned. Rather, we are commanded to celebrate it 50 days after Pesah[5] (Passover[6]).

Concerning Shabu’oth It is not uncommon to hear someone ask: “Is the observance of Shabu’oth akin to the observance of a áYom Tob such as Rosh Hashanah[7], or is it of áa lesser magnitude, similar to Purim[8]?”. It seems, to many, to be lacking many of the practices associated with other holidays.áThisáisádueátoáaálackáofáunderstandingáofátheáimportance and customs associated with the holiday.

Shabu’oth, which comes seven full weeks after Pesah[5] (Passover[6]), ácommemorates the receiving of the holy Torah at Mount Sinai. As such, it is one of the greater holidays in the Jewish calendar, whose observance is the same as Pesah[5], Sukkoth[9] and Rosh Hashanah[7].

Our Rabbis of blessed memory tell us that Israel (the Jewish people) merited to receive the Torah, only becauseá we said Na’aseh WeNishma’ (we will do and we will hear). Na’aseh represents the physical performanceáof eachá Miswah (precept) and Nishma’ represents its study.

When the Children of Israel said Na’aseh WeNishma’, Ministering Angels (Malakhei Hasharareth) descended and placed two crowns on each person’s head. One represented Na’aseh and the other Nishma’. But when Israelá committed the sin of the golden calf — which took place while Moshe Rabbenu, ‘a”h (Moses) was receiving the Torah — destructive Angels (Malakhei Habbalah) came down and removed them.

The Torah was a precious treasure that was hidden for 974 generations before the creation of the world. When Haqqadosh Barukh Hu (the Holy One Blessed Be He) decided to create the world, the Torah was its blueprint. It was then given to us on the understanding that we would keep every aspect of it. The existence of the Jewish religion and nation, as well as the freedom of its people,ádepends on it being dutifully and meticulously followed.

On Pesah we celebrate the Children of Israel’s deliverance from Egypt. But though they were delivered out of the house of bondage, they were as yet not a free nation.

It is written in the Torah “And the writing was that of G-d’s engraved (Haruth) upon the Tablets of Stone” (Exodus c32, v16). In Pirqei Aboth (Ethics of the Fathers) it is stated in connection with the above phrase: ľ “Read not ‘engraved’ (Haruth) but ‘freedom’ (Heruth), for the only free man is one who occupies himself with the study of the Torah.”

In fact, the reason the Children of Irael merited to be delivered from Egypt was to receive the Torah at Mt. Sinai.á At that time they would truly shake off the yoke of slavery and replace it with one of Torah ľ thus becoming a truly free nation.

On Shabu’oth we celebrate the receiving of the Torah. In addition, it is also the Festival of the Reaping of the wheat and of the Gift-Offering.

Since we are commanded to count seven full weeks between the onset of Pesah and the arrival of Shabu’oth, Qiddush on the first night must be made after Layla Wadday (after the stars come out). The second night (for those who live outside the Land of Israel) does not require Layla Wadday and in some cases it is even preferable to start early. The Berakhah (blessing) of Sheheheyanu is recited on both nights.

After the Se’uddah (festive meal) the men stay up all night reading the prescibed Seder Hallimmud (order of learning) known as Hathimah. It includes portions from the entire Twenty Four Books of the Torah, Prophets and Writings (Tannakh), the 613 Miswoth, Midrash and Adra Rabba. No other studies should be substituted by Sephardeem and no Mishnah should be read on this night. Some Ashkenazi congregations have the custom to have lectures or other forms of study.

Immediately following the Seder Hallimmood, Shahrith (the morning prayer) should be prayed. Appropriately, the Torah reading on the first day includes the portion of the Ten Commandments. This is preceded by the singing of the Shbah (song of praise) Yom Yom Odeh (Every Day Will I Give Thanks).

It is written in the holy Sha’ar Hakkawwanoth, concerning the custom of Rabbenu the Ari, z”1, that after the Sefer Torah was brought out and shown he would return to his seat and remain seated till the end of the Parashah. Sepharadi have the same custom and remain seated for all Torah readings, including the Ten Commandments. The Ashkenazi custom is to stand for this portion.

Dairy foods[10] are an essential part of the meal during the day on Shabu’oth. Many varieties are eaten by Sepharadim, including rice cooked with milk and cucumbers in Yogurt. Some of the reasons are as follows:

The numerical value of the Hebrew word for milk (Halab) is 40, which is compared to the 40 days and nights of the giving of the Torah. Another reason is that the source of milk is blood. But just as blood, which is red, becomes white when it turns into milk, so too the Torah has the power to turn sins into merits, as it says: “Eem Yihyu Hata-ekhem Kashaneem, Kashelegh Yalbeenuá(If your sins are red, they will be made as white as snow)”.

A third reason is that just as the first food that a newbornátastes when he enters the world is milk, and the desire for milk remains in the child even when eating other foods, so too the Torah must be more sweetáin our eyes than all the other pleasures of the world. And just as a baby drinks milk whenever it wishes with no preset times, so too the study of the Torah must be constant, as it is written: “We Hagheetha Bo Yomam Walayla (and you shall study it day and night).

The Minhagh of eating pastry fried in butter (Kahi[11]), fulfills the requirement of dairy food, but in addition, it is representative of another important aspect of the festival of Shabu’oth, that of the Gift Offering. As it is written: “…(You shall bring…two tenth parts of fine flour…they shall be baked with leaven…for first fruits unto the L-rd.”).

Aqdamuth which is read in Ashkenazi synagogues on Shabu’oth, is not read by Sepharadi Congregations. However, Meghillath Ruth, Azharoth, ľ which is a poem enumerating the 613 Miswoth and Tehilleem (Psalms) are read over the two days of Shabu’oth.

The Tehilleem have a special importance on Shabu’oth because their author, King David, ‘a”h, died on this day. In general, all the above are read at home, though some congregations read them in synagogue in the afternoon.