The synagogue was built by David Sassoon in 1863 in Poona, where he had his resort home. The synagogue is a well known landmark in Poona, of impressive architecture in spacious grounds in a central location in Poona cantonment. It is popularly known as Lal Dewil (the Red Temple), as it is built of red brick, – a fine, large structure with a clock tower and 90 foot spire, and a bell that chimed the hours. The interior is equally beautiful with stained glass windows and, again in the Baghdad style, with “tebah” and “hekhal”, arches and the women’s gallery.

David Sassoon’s Poona home, where he died in 1864 much mourned by Jews and Indians alike, was across the street from the synagogue. His sons buried him in the synagogue grounds in a fine mausoleum. The synagogue and mausoleum were visited by the President of India, Dr. Zakir Hussein, at a special Memorial Service on 10 December 1968, on the occasion of the Centenary celebration of the Sassoon General Hospitals in Poona established by the Sassoons. 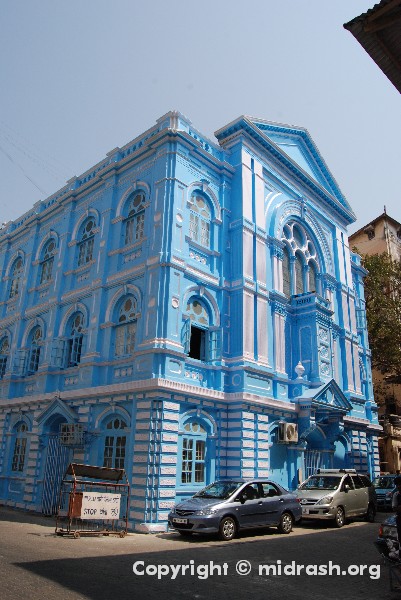 With the expansion of the city of Bombay, the Jewish business communtiy was established in the Fort area. In answer to the growing need for a synagogue here, David Sassoon’s grandson, Jacob Sassoon, built the Keneseth Eliyahoo Synagogue in the Fort in 1884, in memory of his father Eliyahoo Sassoon (founder of E. D. Sassoon and Company). Here land was at a high premium and the synagogue is set in a busy built-up area. Again the structure is outstanding, stone below and brick above. The interior is beautiful, with decorated pillars, the “tebah” and a fine “hekhal” flanked by carved marble and surmounted by a magnificent stained glass arch rising to the high ceiling. This is particularly beautiful in the light of the afternoon sun shining through the stained glass, as the “hekhal” faces west, Bombay being east of Jerusalem. The many sifrei torah, as in the other synagogues, made a grand display on Kol Nidre and Simhath Torah, with the Sassoon family sefarim cased in silver. Very few remain, as many were sent to Israel’s new settlements with the establishment of the state. As in the other synagogues, Keneseth Eliyahoo has a spacious wonen’s gallery. It also has a mikvah and rooms provided on the ground floor for an elementary school and other community activities.

The synagogue was filled to capacity during the High Holidays, particularly with the influx from Bukhara, Persia, and then numbers from Iraq after the Farhud in 1941. Additional services were then held for the Iraqi community in the neighbouring Cawasjee Jehangir Public Hall for Rosh Hashanah and Yom Kippur.

In conclusion, all three synagogues played a central part in the life of their communities, and are very dear to all who worshipped in them. While very few Baghdadis now remain in Bombay and Poona, the synagogue buildings are well maintained and services continue to be held with minyanim composed of Baghdadis and the Bene-Israel community.