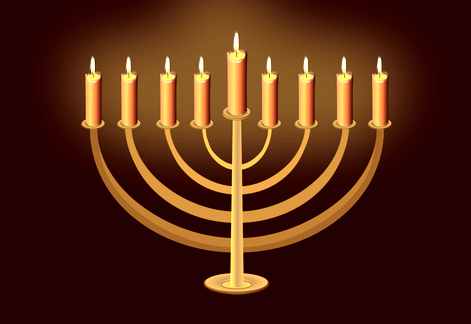 Hear the Halakhoth (laws) of the Lighting of the Hanukkah Lights Shiur on Ben Ish Hai, by Hakham Yoseph Hayyim, ‘a”h given by the Hakham, Rabbi Ya’aqob Menashe Hy”w

Hanukkah means dedication. It is also an acronym for Heth Neroth WeHalakha KeBeth Hillel (eight candles and the law according to the House of Hillel). This refers to the famous difference of opinion Between the Houses of Shammai and Hillel. The House of Shammai said that we should light eight candles on the first night and reduce one every subsequent night. The House of Hillel said that we should light one candle on the first night and increase the amount by one every day. We light in accordance with Beth Hillel.

The word Mashiyah (Messiah) is an acronym for Madliqin Shemonah Yeme Hanukkah (we light throughout the eight days of Hanukkah). What is the significance of this?  By lighting the Hanukkah we perform three Miswoth (precepts) together, as follows:

When one enters one’s home the Mezuzah is on the right, the Hanukkah is lit on the left, and the man who enters has Sisiyoth (fringes) on his Tallith Qatan. The Acronym for Sisith, Mezuzah and Hanukkah is Semah, who is the Mashiyah.

During the eight days of Hanukkah we kindle lights in commemoration of the “miracles, deliverance, mighty deeds salvations, wonders and solace” that our Heavenly Father performed for us in those days, at this time.

It was then that the suppressive and tyrannical rule by the Greeks was overturned in battle and the Beth Hammiqdash (Temple) was rededicated by the Hasmoneans.

There are different opinions as to why, when they entered the Temple and found only one cruse of pure oil for the Menorah (sufficient for only one day), they required eight days to make new oil.  One opinion is that they were defiled from war and had to wait to be purified before making it.

On each night of Hanukkah, from when the time for lighting arrives, we are not permitted to eat or even study Torah till the lights are actually kindled.

The choicest way of performing the precept of the lighting of the Hanukkah lights is through the use of olive oil.  However two types of lights may not be mixed (such as olive oil and wax candles) as it should not appear that two people lit them.

In accordance with the teachings of Sephardi Hakhamim, z”l, only the head of the household may light Hanukkah lights in each household.  The other members of the family stand beside him and watch.

It is good, however, to allow one of the children to light the additional candle – referred to as the Shammash – in order to train them in the performance of the Miswoth.  The Shammash, which is generally considered to have some Miswah attached, should be lit last and should not be used to light the other lights.

This is in accordance with the Sephardim.  Ashkenazim have the Minhagh of having each child light his own Hanukkah.

In any case, each one must do in accordance with the teachings of his forefathers and may not change.

One may not make use of the lights during the time that they are required to burn and even though some hold that the light of the Shammash may be used, according to the Qabbalah (Jewish Mysticism) it may not.

The Ashkenazi Minhagh is to follow the lighting with the singing of the hymn Ma’oz Sur, a traditional European song. Sepharadim have different songs for Hanukkah, but do not have the custom of singing them after the lighting.

The story of Yehudith, daughter of the Kohen Gadol (high Priest) Yohanan, bears some similarities to the events that are commemorated in Hanukkah, and is also remembered during these days.

As is written in “Hemdath Yamim”, the cruel Greek ruler desired Yehudith and had her brought before him.  She fed him with dairy foods and wine till he fell asleep and then severed off his head.  At the sight of their leader’s decapitated head, the enemy soldiers fled.

For this and other reasons, Hanukkah is of specific importance to women. It is important, therefore, that they do no Melakha (work) while the lights are burning each night, – i.e. for the half hour that they are required to be alight.  It is appropriate also, for a woman whose livelihood does not depend on it, to abstain from doing any Melakha on the first and last days of Hanukkah.

In the memory of the afore-mentioned story of Yehudith, Sephardim (and some Ashkenazim) partake of dairy foods during the Holiday.  The Ashkenazi custom is to eat foods fried in oil, in memory of the miracle of the cruse of oil.  In general, Sepharadim have not adopted this custom.

On Shabbath Hanukkah and on Rosh Hodesh – and especially if they fall on the same day – one should eat more and sing Shbahoth (songs of praise) such as Wethismah Bakh Attah Malka.

On ‘Ereb Shabbath Hanukkah one must be particularly careful to pray Minha before lighting the Hanukkah lights.  And these, in turn, must be kindled before those of Shabbath.

At the close of the Shabbath, Sepharadim light the Hanukkah in the synagogue prior to Habdalah, but at home the order is reversed.  Ashkenazim have differing customs concerning this.

May we merit to see the Hanukkah (dedication) of the third Temple, speedily in our days.  Amen.

Every night, when lighting the Hanukkah lights, I recite:
1) Lehadiq Ner Hanukkah. (Not Ner Shel Hanukkah – according to the Sod. This is the custom of most Sephardim). Ashkenazim (most) say Ner Shel Hanukkah.
2) Hanneroth Halalu.
3) Mizmor Hanukkah Habbayith.
4) Wihi No’am (7 times).
5) Yosheb Besether ‘Elyon.
Ashkenazim conclude the lighting with the hymn Mao’oz Sur.  Sephardim do not have the custom of concluding the lighting with songs of praise. However there are specific songs for Hanukkha, such as Y-a Hassel Yona [Wethismah Bakh Atta Malka], Yasa Limlokh, Yabbi’oon Sephathai Shirah and Yithro’a’oo.

If I am Sephardi, I do not use the Shammash to light the other candles, but instead, I use matches or a separate candle to light them.  I then
light the Shammash last. If I am Ashkenazi, I light all candles with the Shammash. (Click here for an explanation of the lighting of the Shammash).

If I am Sephardi ,we only light one Hanukkah (Hanukkah Menorah) in my home, which is lit by the head of the household.  All other members stand by and watch.  (There is a difference in ruling between Sepharadi and Ashkenazi Hakhamim). If I am Ashkenazi, the children light too.

I eat more during hanukkah, and especially on Shabbath and Rosh Hodesh of Hanukkah and sing Shbahoth (songs of praise).

The children are trained in the Miswah of giving money in charity.   Ashkenazim have the minhagh of giving Hanukkah money [and presents] to the children.  Although there is a source for it, this is not the prevalent custom among Sephardim.)

Women abstain from Melakha (servile work) at least during the time that the lights are required to be alight.