Click here to hear the Halakhoth (laws and customs) of the 9th of Ab from Ben Ish Hai, given by Rabbi Ya’aqob Menashe.

Click here to read the Laws for this period from ATorahMinute.com

Watch the videos on NonstopTorah.com: 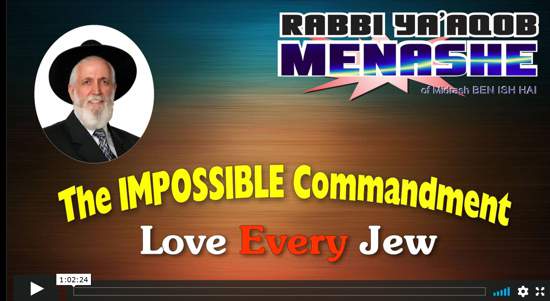 Thus is it written in our Holy Talmud (Tractate Ta’anith):

“Five calamaties befell our forefathers on the Seventeenth of Tammuz, and five on Tish’ah be Ab (the Ninth of Ab).

On the Seventeenth of Tammuz the Tablets of Stone were broken (by Moshe Rabbenu), the daily-offering ceased (in the Temple), the walls of the City (of Jerusalem) were breached, Apostomos burned the Torah Scroll and placed an idol in the Hekhal (Sanctuary). Some say it was actually Apostomos, while another opinion is that it was Menashe.

On Tish’ah be Ab it was decreed upon our forefathers that they should not enter the Land of Israel (because of the sin of the Ten Spies), the First Temple was destroyed, so too the Second, Bittair was seized and the City of Jerusalem ploughed up.”

These twenty-two days from the Seventeenth of Tammuz to Tish’ah be Ab are thus, among the saddest in our calendar and the Halakhoth (laws) and the Minhaghim (customs) that we have adopted, reflect this.

On these “Days of Distress” we lessen our laughter and pleasures for it is written that every generation which does not witness the rebuilding of the Beth Hammiqdash (Temple), it is as if it were destroyed in its day.

Dancing is not permitted for all the twenty-two days and a Jewish musician who performs for non-Jews should not perform on these days either. However, if he would have nothing to eat, he is permitted to perform from the eighteenth till the twenty-ninth of Tammuz, but not after.

One should avoid reciting the blessing of Sheheheyanu on these days except in cases such as a Pidyon Habben (redemption of a first-born male) or on a new fruit that would not be available afterwards. During this period there is a custom among Sepharadim to recite Tiqqun Rahel in the afternoon.

From the onset of the month of Ab joyfulness should be lessened, and one who has a court-case with a non-Jew should postpone it till after the tenth of Ab.

Negotiations for and acquisitions of items for joyous purposes, such as marriages, are postponed till after the Ninth of Ab. However, they are permitted if the items would not be available later, or if they would then be more costly.

While some Sepharadim do not perform weddings from Rosh Hodesh (the new month) to the Ninth of Ab, the accepted practice is to be strict and forbid it from the Seventeenth of Tammuz.

Bathing is not permitted during these nine days. Today, however, while there are different opinions on the matter, some consider, that a less pleasant option, such as a cold shower, is acceptable. In any case, there is no question that it is permitted for health and ritual purposes.

THE WEEK OF TISH’AH BE AB

The week of Tish’ah be Ab is calculated from the Shabbath preceding it to Tish’ah be Ab. During this week, cutting of hair is prohibited, and this is the Minhagh of most Sepharadim. Ashkenazim prohibit it for the twenty-two days. Some Sepharadim have adopted this custom also.

Washing clothes is not permitted (except for children’s diapers and � some say � babies’ clothes). Bathing on the eve of Shabbath Eikha (also known as Shabbath Hazon) is permitted. However, as the opinions about washing oneself from Rosh Hodesh vary on the precise details, one should consult a Hakham.

On Shabbath Eikha Sepharadim wear Shabbath clothes, in honor of the Sabbath. Hassidim also have this Minhagh, but many other Ashkenazim do not. But, since after this we are not permitted to wear clean clothes till after Tish’ah be Ab, it is common in warm weather to wear several garments for one hour each, prior to Shabbath, and as such, they are no longer considered clean and may be worn during the week.

Sepharadim do not partake of meat and wine from the night after Rosh Hodesh Ab. But on Rosh Hodesh itself, meat and wine are consumed in honor of the special day. Ashkenazim abstain from Rosh Hodesh. It is common among Sepharadim to break the fast of Tish’ah be Ab with a chicken meal. The Ashkenazi custom, however is to postpone this till the day of the tenth of Ab.

One may not cut one’s nails during this week, though on ‘Ereb (the eve of) Shabbath Hazon it is permitted. However, if the nails extend beyond the flesh of the fingers they may be cut, even on this week, as it is a great obligation to do so according to the Qabbalah.

For specific information for when the fast of the 9th of Ab falls on Sunday, click here.

The five items prohibited on Yom Kippur, eating and drinking, bathing, anointing, wearing (leather) shoes and marital relations are likewise prohibited on Tish’ah be Ab. It should be noted that one should not go barefoot on Tish’a Be Ab or at any time for several reasons. One of them being that the ground was cursed and one who walks barefoot on the ground will have the Tum-ah (impurity) stick to him.

The Se’uddath Hammafseqeth (final meal) before the fast (if it is eaten after the middle of the day) may not consist of more than one cooked food. However, if it is usual to cook two foods together, such as rice and lentils (Kitchri), they are considered as one and are permitted.

One should not sit on the floor itself, while eating this meal, as this is not good according to Qabbalah. Instead, one should sit on a mat or something similar.

There are many different opinions concerning the wearing of Sissith and Tefilleen on Tish’ah be Ab morning, The way mentioned in the Holy Work “Ben Ish Hai”, is to don them at home in the morning and read the Shema’ only (some include Qaddesh Lee), and they are not worn again the rest of the day.

“Eikha” is read at night and again in the morning, in accordance with the Sepharadim. Some Ashkenazim, however, read it only at night.

One must sit on a mat or something low from the night of Tish’ah BeAb. Ashkenazim can sit on normal chairs from the middle of the day of the 9th of Ab, but Sephardim should wait till approximately 4:00 p.m.

Ashkenazim recite a Haphtarah during the Minha prayer of all the “Five Fast Days” and the portion read is “Dirshu”. Sepharadim, on the other hand, do not read a Haphtarah on any of them, except for Tish’ah be Ab at which time the portion “Shubah” is read.

After ‘Arbith, there is a custom to wash ones hands properly (as only the fingers were washed in the morning) and (when feasible) to wear leather shoes before reciting Birkath Hallebanah, (blessing for the moon) with a happy heart.

May we all merit to see the day when, as we have been promised, this and other days of sorrow will be turned into days of joy, happiness and good seasons. Amen.