(This article [without the graphics] was originally published in Nehardeya Magazine).

Baghdadi Jews had sailed down the Persian Gulf to Surat, the trading center on the west coast of India, since the mid-18th century for the purpose of trade, often returning home after a few years. It was not till the next century that Baghdadis gradually settled in Bombay and Poona. These communities were then set on a firm foundation by the house of David Sassoon in the second half of the nineteenth century, and by his grandson Jacob Eliyahu Sassoon in the early twentieth century.

David Sassoon himself had to flee Baghdad in 1826 from the oppression of the governor and Wali of Baghdad, the extortioner Daud Pasha, first to Bushire in Persia, then with his family to Bombay in India, where under British rule there was freedom of worship, expanding opportunities for trade, and a good education for the childrern. Starting cautiously, in the course of time and extensive family business developed, while the spiritual and religious traditions of Baghdad were always closely maintained. With increasing wealth, the Sassoons gave huge sums to both Jewish and public institutions.

David Sassoon built fine synagogues in extensive grounds, – the Magen David Synagogue in Byculla, Bombay, and the Ohel David Synagogue, a landmark in Poona, a resort town 120 miles from Bombay. Later his grandson, Jacob Eliyahu Sassoon, built the Keneseth Eliyahoo Synagogue in the Bombay Fort area, naming it for his father Eliyahu (David Sassoon’s second son). In all three synagogues “Nosah Baghdad” (the Baghdadi mode of prayer) was followed. Hakhamim came from Baghdad and contacts were maintained with the Baghdad Beth Din. 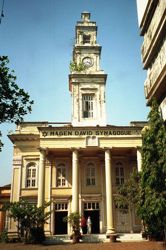 This synagogue was built by David Sassoon in 1861 in Byculla, where the family first lived. This was then the best location in Bombay before other areas were developed. The large synagogue was set in extensive grounds which were to prove very valuable. Built in the spacious style of Victorian architecture, it was fronted by pillars and a clock tower. The interior was in the style of the Baghdad synagogue, with the ” tebah” for the hazan and the “hekhal” for the sifrei torah, and a spacious ladies’ gallery. The prayers were conducted in the Baghdad “nosah”. David Sassoon also built an elementary school to one side in the same large compund to provide an education for the community’s children in Torah and proper behaviour. This was later expanded into a high school by his grandson Jacob Sassoon, and renamed “The Sir Jacob Sassoon Free High School”. The synagogue and school grounds became in effect a community center for the Jewish community of Byculla, where young and old would meet together in the evenings.